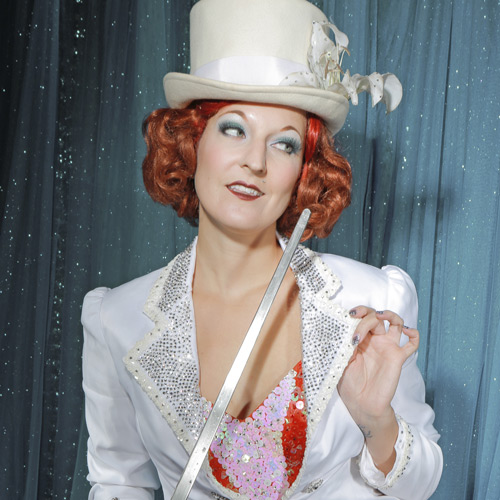 For over a decade, Gin Minsky has been known as NYC’s premiere tap dancing burlesque performer and go-to gal for all things Jazz Age. A classically trained dancer, her performances include a varied spectrum of performative dance acts and sideshow spectacle, and are see in a wide range of venues from cabaret clubs to upscale concert halls.

Gin Minsky first hit the stage with taps on her feet at the tender age of five and has continued to dazzle and delight audiences around the world. By blending skill, creativity, technique and charm, she has become known as one of the top burlesque performers, performing at notable venues including Carnegie Hall, Leicester Square, Philadelphia Museum of Art, Joe’s Pub, Iridium Jazz Club, Birdland, McKittrick Hotel, Copacabana, Highline Ballroom and Webster Hall. Gin has also garnered a notable list of clients featuring high-end corporations and well-known celebrities. She has also been featured 6 times at the “Oscars of burlesque,” the Burlesque Hall of Fame Weekend in Las Vegas, winning the award for “Most Classic” in 2017. Accomplished as a solo performer, Gin can also be found partnering with dance legend Roddy Caravella, impresario Dandy Wellington, and as one half of the Minsky Sisters with Kristen Minsky.