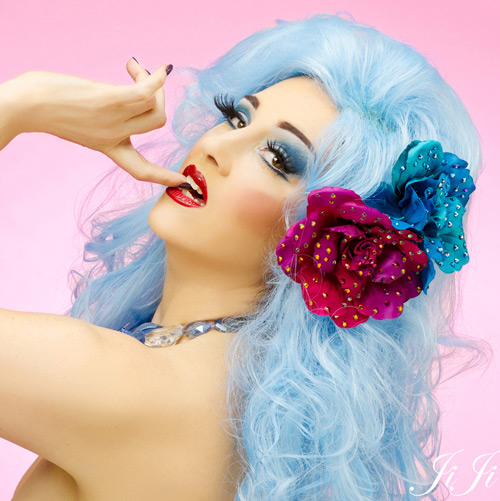 Miss Indigo Blue is the Headmistress of the Academy of Burlesque. She founded the Academy in 2003 in response to her burning passion to teach and share her love of Burlesque with eager budding ecdysiasts. A lifelong student of dance, theater, and performance, Miss Indigo first trained with Burlesque Legends Wild Cherry and Kitty West in 2001. Shortly thereafter she met Dixie Evans, the proprietor of Exotic World and the Burlesque Hall of Fame, and Indigo’s life changed evermore.

With her strong dance and theater background and extensive experience as a stripper, Miss Indigo Blue’s sensuality, musicality, eroticism, and humor earned her a reputation as a sought-after entertainer and instructor.

Since 2008, Miss Indigo Blue has been the co-director of Education for The Burlesque Hall of Fame in Las Vegas. That same year she founded BurlyCon Burlesque Convention, and serves as the Executive Director.

In 2011 Miss Indigo Blue won the highest International title for Burlesque performance, “Miss Exotic World”. She remains dedicated to Burlesque education, and continues to teach and administer at the Academy while maintaining a busy performance and touring schedule.

Miss Indigo is holds numerous other awards from the Burlesque Hall of Fame including Most Classic 2011, 1st Runner-Up Tassel Twirling 2004, Best Legs 2003, and Little Miss Aftershock 2002. In 2008 she was selected by Heeb Magazine for the “Heeb 100”, won “Sexiest Eyes” at the New York Burlesque Festival, and starred in the critically acclaimed documentary film “A Wink And A Smile” about her Academy of Burlesque. She currently performs as a soloist, with Lily Verlaine Presents, and as a troupe member of The Atomic Bombshells. Miss Indigo Blue is based in Seattle, WA.