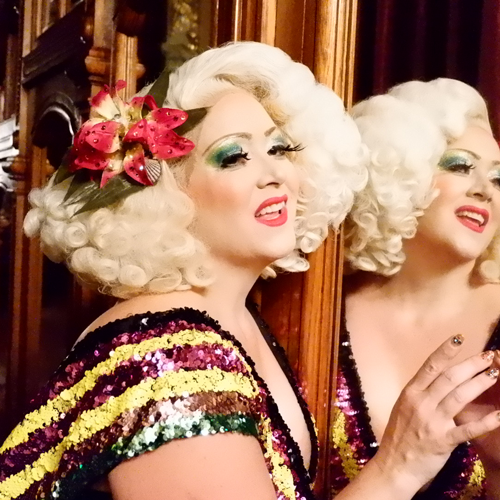 The Definition of Burlesque, Miss Dirty Martini, is one of the original creators of the New Burlesque revival in New York City which has taken the world by storm. She
has received rave reviews for her ground breaking, stereotype busting performances, her over the top physique and classical dance training.

"The decadent expression of female sensuality in action"
- Daily News

She has been voted the number one burlesque performer multiple times by burlesque fans worldwide. Miss Martini was featured in a five page editorial in V Magazine photographed by fashion legend Karl Lagerfeld who described her as “Chic
and charismatic”. She has also posed for many prestigious photographers including Steven Klein, Roxanne Lowitt, Andreas Serrano and Mario Sorrenti for fashion magazines
Vogue, Esquire and Vanity Fair. Miss Martini has headlined burlesque shows all over the world and has been featured in nearly every book written on the subject. With the Cabaret New Burlesque, she has performed for sold out theaters throughout Europe. Miss Martini played a version of herself with the Cabaret in the film "On Tour" directed by Mathieu Almaric. (Palme D’Or -best director 2010, International Critics
Award Cannes Film Festival) They jolted the Cannes film festival and the 2011 Cesar Awards in Paris with their refreshing positivity and joie de vivre. Miss Martini currently
tours with burlesque superstar Dita VonTeese in her acclaimed roadshow, Art of the Teese, the most lavish revue in burlesque history.