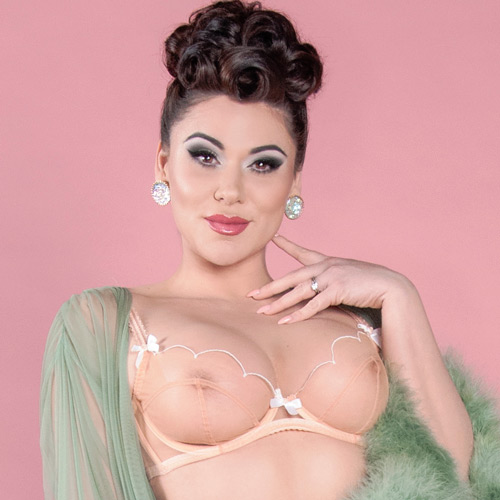 Roxi D’Lite is one of the world’s premier burlesque performers and a Queen of Burlesque at the Burlesque Hall of Fame in Las Vegas. Specializing in aerial acrobatics, performance art and fetish performance, her talents stretch beyond performance alone. Roxi is revered as a talented show producer, her work with Detroit's Theatre Bizarre as the Producer of the Dirty Devil's Peepshow put her production on the map as one of the most sought after productions to perform by burlesque performers all over the world.

In 2010 when Roxi first made her name by becoming one of the youngest performers to ever be crowned Miss Exotic World by the Burlesque Hall of Fame in Las Vegas. For seven consecutive years Roxi has been voted by her peers one of the “Top 10 Burlesque Performers” in the world.

Unanimously credited as Canada’s Burlesque Queen, Roxi is an innovator of the burlesque world. Classic striptease with a modern twist is the hallmark of Roxi’s performance style; a trailblazer who seamlessly blends elaborate props and costumes with circus performances.

Roxi starred in the award-winning feature film The Burlesque Assassins and even took the world of comic books by storm where she appeared twice as a guest-villain in The Goon, an Eisner Award-winning comic series published by Dark Horse.

Not only a talented performer and producer Roxi is a published pinup / glamour model and a talented photographer often shooting much of her own photographs.

In 2019 Roxi and her charming and talented husband collaborated on their passion production, The Whoopee Club, a cabaret production set to live music by their very own 6 piece jazz band, The Whoopee Cushions. The Whoopee Club is a tongue in cheek romantic comedy about The Champagne's who are swingers that live to host lavish parties for sexually adventurous couples of all orientations. The premise of the show is to push boundaries and expectations of what swinging is, making it more accessible to everyone no matter how they identify.

Throughout the world Roxi’s reputation has been indelibly etched in the annals of time. The Detroit Free Press refers to Roxi as, “the reigning burlesque diva," while in Vancouver, The Province called her “a bubbly, ravishing presence” and in Halifax, the Chronicle-Herald referred to her simply as the “Notorious Roxi”.