Is there a burlesque super fan who deserves a moment in the spotlight? Send your nominee to tips@burlesquegalaxy.com for their chance to shine!

How long have you been a fan of burlesque?

Since at least 1998, seeing shows at conventions in New Orleans, Atlanta, and Philadelphia (we didn’t see burlesque in NYC until 2008)

When did you know you had crossed the line from “appreciative” to “super fan”?

What or who first turned you on to burlesque?

Friends we visited in the aforementioned cities.

What is your favorite hometown venue and why?

Now THIS is a challenging question. The criteria on which we would rate venues are (1) creativity, originality, and general quality of the show being hosted, (2) sight lines, because we won’t go to a show if we can’t SEE the show, (3) atmosphere, because it should be boisterous but not deafeningly loud, (4) convenience, because no one likes waiting on long lines to get into a show. If I had to pick just one venue, I’d probably go with Joe’s Pub(lic Theatre) on Lafayette Street. They let you pick your seats in advance (no worries about general admission and scrambling for a seat), the food and drinks aren’t bad or hideously expensive by NYC standards, the stage has a decent size, the backstage seems to accommodate performers well, and they have a nice variety of shows.

Do you have a regular table/seat? What makes it special?

We love to get as close to the action as possible. We don’t mind sitting in “the splash zone”, and enjoy the occasional opportunity to be a prop for a performer doing an act (i.e., holding something, catching something, etc.). And some performers have told us they enjoy seeing us at their shows, so we like to make it easy for them to see and hear us.

What’s your libation of choice?

I’m not much of a drinker, and usually grab a club soda with lime. When I want an adult beverage, it’s usually bourbon, neat. Connie prefers Prosecco, or a nice IPA if the bar has them, preferably on tap.

What was your most memorable night of burlesque?

Connie and I discussed this, and we agree that it must have been Sunday, October 2nd, 2016 at the Highline Ballroom. It was the Golden Pasties awards night of the 14th annual New York Burlesque Festival. To our great surprise, Connie and I learned a few weeks earlier that we had been nominated for a Golden Pastie in the category Super Fans. There are many dedicated fans of burlesque in NYC, and we’re honored to call quite a few of them friends. We looked forward to seeing them at shows as much as we looked forward to performances. On the night of the awards, we and the other nominees received another honor. Angie Pontani, a co-producer of NYBF with Jen Gapay, took over the MC duties herself for this award. And when we were announced as the winners, it was difficult to contain our excitement hearing so many people whom we admired and respected so much cheering for us.

What is the most exhilarating element for you? The costumes? The skills? The skin?

It’s more the creativity of the performers, which includes the costumes and the skills. The skin is interesting only for the fact that they find such creative ways to get down to it.

Have you ever dated a performer?

No, because we were married in 1982, and many of the performers we know weren’t even born then! However, 6 or 7 years ago, a performer we know well joined us at the NYBF’s Friday night event at Brooklyn Bowl as our date. So, maybe?

Do you generally go with friends? Or fly solo?

It’s mostly date nights and we go as a couple. We’ve met a few folks we’ve gotten to know and will go with them, too. When we got really into it we’d go to separate shows if they were on the same night or overlapped. Our daughter attended some shows with us, as did Connie’s aunt and mother (who passed away in 2018), who would regularly join us for the NYBF.

Do you travel specifically for burlesque?

We have on a few occasions. We attended the Philadelphia Burlesque Festival for 3 of its 4 years, went to the Americana Burlesque and Sideshow Festival in Asheville, NC one year. We went to Boston for Alternatease a few years ago, and to Nashville and Atlanta to see shows at their City Winery venues.

Do you ever NOT tip? Why?

We NEVER fail to tip. We’ve been fans long enough to have some understanding how much effort, time, and expense goes into performances. As with drinking in a bar or eating at a restaurant, our rule is that if we can’t afford to tip, we can’t afford to go. And we both believe that performers are compensated far less than they should be for what they do.

Have you ever introduced someone to burlesque and it didn’t go well?

Burlesque isn’t for everyone, so we appreciate when friends are at least willing to check it out for themselves before judging it. If they decide it’s not their thing, that’s okay.

Have you ever performed yourself? Or wanted to?

I never have, nor wanted to (I have no stage talent and a face for radio). Connie thought about it but decided she didn’t have what it takes. But she has worked as a stage kitten a few times, and enjoyed it.

If you were a performer, what would your burlesque name be?

If you were curating your ideal evening of burlesque, who would perform? No time or geographic boundaries…go wild!

If there were no time or geographic boundaries, I think I’d love to put together a lineup of burlesque legends in their prime from the late 19th century until the middle of the 20th. Women like Tony Elling, Lottie the Body, Barbara Yung, Amy Fong, Sally Rand, April March … what an incredible show that would be! And that in no way is meant to disrespect the incredible performers working today, whom we love. I know they’d be in the audience with us for a show like that. 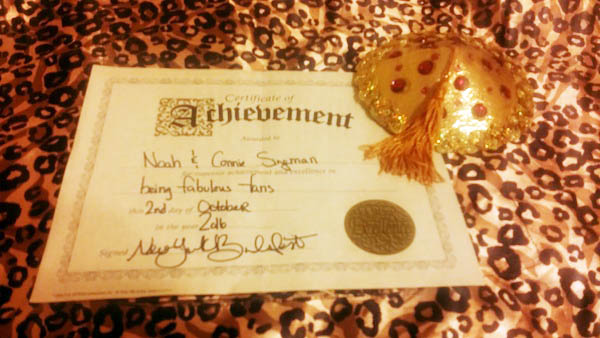 All images courtesy of Noah & Connie.